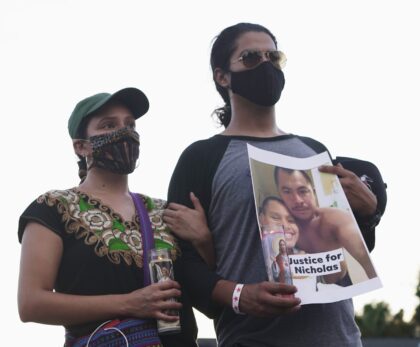 Our congregation has had a long-term relationship with the Coalition of Immokalee Workers — marching with them in Miami to get a Fair Food agreement with Burger King and several times in Lakeland to accomplish the same with Publix. We fed 300 volunteers when they marched in St Pete against Wendy’s. More recently we have signed public letters requesting that Gov. DeSantis provide COVID tests, protective equipment and ensure that CDC guidelines are being followed in the fields. Our members made protective masks for them, and we had a Share the Plate for those who became ill.

From a STATEMENT FROM THE COALITION OF IMMOKALEE WORKERS:  Nicholas Morales, a single father, an Immokalee farmworker, and a longtime part of the CIW family, was shot to death by Collier County Sheriff deputies in the dead of night on Thursday, September 17th.

Nicholas was alone and is no longer with us, and so cannot provide his own recounting of events. According to the recording of the 911 call released by the Sheriff’s Office, a deputy fatally shot Nicholas mere seconds after arriving on the scene. The officer claimed to fear for his life because Nicholas was carrying a shovel and an unidentified “sharp object” and was “advancing” toward the police officers.  In other words, an officer backed by several fellow officers, also armed, took mere seconds to analyze a fluid situation and determine that a lone man posed such a threat that he had no choice but to take his life.

We must have a full investigation and justice for Nicholas and his family, as well as for the broader Immokalee community as a whole.  And so that justice may be done, the Sheriff’s Office must produce a complete accounting of what occurred in the seconds between the deputies’ arrival, and the shooting of Nicholas Morales.   We call on the Sheriff’s Office to release any video footage or audio recordings of the event immediately, and to reveal the identity of the officers involved without further delay.

I called my contact in Immokalee offering our condolences but asking how best to help. Her reply: At this time we are working with Nicholas’ family and legal team to figure out what our next steps are to bring justice for him and his family. As soon as we have more information and a plan of action I will be sure to let you know. We will definitely have ways for allies to plug in when we know what our next course of action will be.